Please:
Contact me if you can tell me more about your ancestor, your historic neighbour - or relative. 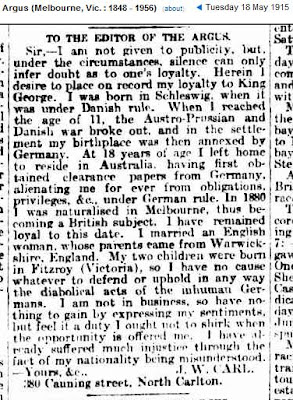 Albert Charles John CARLE was born in Hamburgh Stadt on 12th November 1865. He departed the Deutsch Reich via England and arrived in Melbourne on the ship 'Derbyshire' in 1889. He married Annie Elizabeth STREET in 1898 and by 1914 the Carles had one Australian daughter. At the time of Outbreak of the Maelstrom in Europe he had been about 25 years in Australia living all that time in and around Prharan and he then worked as a Chauffeur, living at 14 Gibb Street, Balaclava. It was late in the days of War when he completed his 'Aliens Memorial' for Naturalisation on the 8th August 1914

Carl Hadler von CARLSTORFF was born on the 17th July 1877 at Wismar, Mecklenburg, Deutschland. Carl Hadler von CARLSTORFF emigrated out of the Deutsch Reich from the Port of Hamburgh on teh steamship "S.S.FRIEDRICH DER GROSSE" to arrive in Australia at Port Jackson, Sydney, NSW on the 10th February 1912. Upon disembarking Von Carlstorff immigrated immediately to Brisbanem QLD where he stayed for six months before taking the way south to Melbourne, Victoria where he was for two years before returing to his original place of arrival. After two and a half years years in Australia, at the age of 37 he was married and living with his wife, working as a Merchant from No. 22 Gurner Street, Paddington NSW when he swore the Oath to be Naturalised in his Aliens Memorial of 23 September 1914 at Sydney, NSW.

Bretislaw CHERNEY was born on the 6th March 1878 in the Czech village of Vysoké Mýto, which the Germans call Hohenmauth, then under the rule of the Habspurger Österreich (the Austro-Hungarian Empire). A German form of his name was Bretislaw TSCHERNER. Cherney emigrated from Austria on the vessel 'GEROV 'to arrive at the Port of Fremantle, Western Australia on the 19th September 1906. After six years in Australia, at the age of 37 years, Cherney Swore the Oath for his Aliens Memorial for Naturalisation before Resident Magistrate, Mr William Lambden Owen, on the 18th December 1912 at Bridgetown Western Australia, while residing at Big Creek W.A. where he was a Farmer.

Stephan CLUPH a Hungarian of the Österreich

Stephan CLUPH was born on the 4th April 1886 at Lopusno, in the district of Máramaros, Ungern, Österreich(the Austro-Hungarian Empire) or Hungary. CLUPH emigrated by way of the refuge and freedom of Belgium and embarked at the Port of Antwerp on the steamship "S.S. BIELEFELD" to arrive in Australia at the Port of Melbourne, Victoria on the 19th November 1911. Upon disembarking CLUPH went upcountry in northern Victoria, living in the Goulburn valley town of Shepparton for six months, and then in the Westerport, Gippsland, town of Tooradin for six months before crossing over Melbourne again to the booming mining town of Broken Hill, New South Wales, where he spent 12 months, before heading furthet out again, to the smaller mining enterpises at White Cliffs, in outback New South Wales. CLUPH was a single man working the White Cliffs as a miner when he took the Oath and was Naturalised in his Aliens Memorial of 19th August 1914, in the days of war being declared. Later, during, or after the war Stephan Cluph Immigrated to Queensland, and by 1920 was living at Gordonvale, Via Cairns, QLD.

THE CONZELMANN BROTHERS were born, Conrad on 18 Dezember 1875, and Karl on 15th Marz 1880, in the Black Forest village of Thailfingen, in the Circle of Balingen, in Königreich Württemberg, (now called Tailfingen, in the State of Baden-Württemberg). The brothers arrived in Melbourne, Victoria independently. Carl Conzelmann, an engineer by trade, emigrated on the ship "PERSIA' from England, arriving at Port Melbourne on 17th August 1908. He was naturalized on 25 September 1911 after three years in Australia, at age 31, at 28 Gibden Street, Burnley (Richmond). He was married to Margaret O'CONNOR in 1911 and they had a infant daughter. Conrad CONZELMANN emigrated on the steamer "FRIEDRICH DER GROSSE" arriving in Port Melbourne about three years ahead of his brother, on 31st January 1905. When he was naturalized on 12th May 1909 he was unmarried, and by occupation a 'Mechanic,' presumably working with the potentially fatal new motor cars. He was then residing at a Coffee Palace, in Smith Street Fitzroy-Collingwood. Conrad married Mary Ann GLOVER in 1910 and they had two Australian children before the outbreak of the 'not-so' Great War in 1914. Peace is often as dangerous as war, and also has its fatalities, as illustrated by Conrad Conzelmann's death in Melbourne, even before the outbreak of hostilities in Europe in 1914. Maybe, the 'motive' behind the following account was an earlier outbreak of hostilities come to a head out of an inimical relationship. Melbourne Deutscher Krankenverein 1923-1924

The Sydney Morning Herald (NSW: 1842-1954) Friday 24 April 1914.
MOTOR FATALITY. - DRIVER COMMITTED FOR TRIAL.
MELBOURNE, Thursday. -An Inqest was held to-day concerning the death of Conrad Conzelmann, aged 29 years, which occurred on April 15 at the Alfred Hospital, as the result of injuries inflicted on him by a motor-car on the same day driven by Frederick Wigley, a commercial traveller. The jury returned a verdict that death was due to the criminal negligence of Wigley, whom they found guilty of manslaugher. Wigley was committed for trial.

August William Frederick COOK [aka August Wilhelm Friedrich KOCH] was born at Putlitz, Kreis Prignitz, in the Pritzwalk of Brandenburg, Prussia, on the 17th August 1856. Cook emigrated out of the Deutsch Reich by way of the British Asian colonies and there embarked at the Port of Hong Kong on the ship "ARLIE" to arrive in Australia at Port Darwin, Northern Territory in early February 1885. On disembarking 'Cook' lived in Darwin for nine months, and then immigrated to Woolongong, New South Wales where he stayed for five years. He then went out to the Diggings and travelled in NSW for eight years. He then crossed into Queensland and was at Claremont for two years, at Mount Morgan for two years and then went to the Mackay district of Queensland. At age 54 after 26 years in Australia August William Frederick COOK was still single and working as a Labourer when took the Oath of Naturalisation in his Aliens memorial of 16th January 1911 at Marian, near Mackay, QLD.

Heinrich Hubert KOCH - [aka Henry Hubert COOK] was born about 1856 in Hannover, Deutschland. Koch emigrated out of the Deutsch Reich to arrive in Australia probably at Port Adelaide in about 1874. After ten years in Australia he was aged 28 and working as a Carpenter at Hergotts Springs, now Maree, near Lake Eyre, South Australia when he took petition for Naturalisation in his Aliens Memorial of 30th December 1884 and in the Oath of 28th May 1885.

Oscar CORVIN, the son of Friedrich Von (CORVIN) DRYGALSKI & Ida MOHGEMALTHY was born on the 5th September 1830 at Heilsburg, in Königsburg, Ost Prüßen (East Prussia. He does not really fit in this era as he arrived in Melbourne from Prussia on the 29th January 1857 on the sailing ship "LA ROCHELLE." After spending 18 year son teh Blackwood Diggings in the Lerderderg & Trentham districts, he moved to the Benalla district of Victoria. In Victoria he married Louisa DAVIS, in 1880. Louisa was born in 1862 at Woodend, Victoria, a daughter of James Davis & Mary Godden. Family: 1. Luise Hedwig CORVIN b. 1881 Kyneton; 2. Anna Ada CORVIN b. 1882 Violet Town; 3. Ida Frances CORVIn b. 1885 Baddanginnie; 4. Ruth Elisabeth CORVIN v. 1887 Violet Town; 5. Eva Rose CORVIN b. 1889 Bendall; 6. Charlotte Marie Auguste CORVIN b.1892 Benalla; 7.Minnie Henriette CORVIN (1899-1908 Benalla. After fifty years in Australia, Oscar Corvin took the Oath to be Naturalised in his Aliens Memorial of 28th May 1907 at Euroa, Victoria. Oscar CORVIN died at age 69 in 1908 in Euroa, where he is buried.

Heather McNamara writes: 'My Great Grandfather is ... Oscar Corvin. Oscar Corvin was the name he adopted once he arrived in Austrailia his actual name was Otto or Oscar Von Drygalski and he was born in Koeningsberg Prussia 1/1/1839. I have sent a link to your paper to my Aunt who knows more about the family history than I, and she would be able to fill you in with more detail. I am fascinated by what I have heard through the family about Oscar and his background; our family holds a copy of his mother's will, I had a translated copy which I had gotten from my Grandmother many years ago but I have since mislayed. The will mentioned Oscar but that he "should not receive anything". My grandmother recalled at the time that there had been linen sent out from Germany which was embroidered with a family crest.
Oscar married Louisa Davis and together they had 9 daughters my Grandmother was their youngest. Oscar was buried in Euroa.
My Grandmother and subsequently my mother and her siblings grew up in Benalla.
I would love to learn more about Oscar Corvin; I have done a little research on the name "Oscar Corvin" curious to know why this name would be his choice; the only reference I could find is to a well known writer of that period? Apparently he could never return to Prussia; obvously his family were quite important and thus he was dispossessed; he was in the Prussian Navy and jumped ship to come to Australia.'