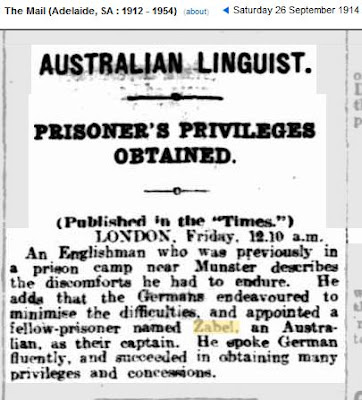 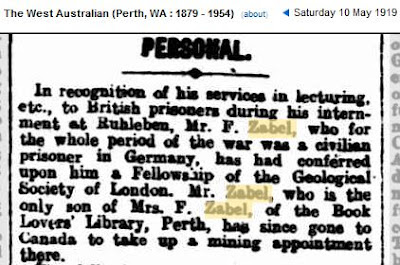 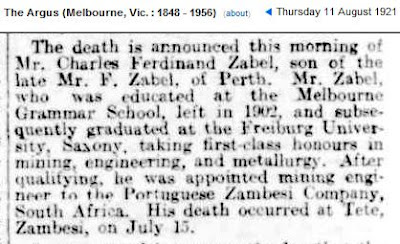 Karl Ferdinand ZABEL born 1887 Armadale, Prahran, Victoria-1921, "Charles Ferdinand Zabel was a geologist and manager of manganiferous iron mines at Bingerbruck (Germany) when war broke out and "was interned at Ruhleben, where he distinguished himself by his exertions for the welfare of his fellow-prisoners and ably maintained the honour of the country to which he owed allegiance." Barbara Kearns, Perth, Western Australia.
Zabel went to Canada after the war, as is indicate din the second citation, above." He was the son of Kunibert Leopold & Francesca Friedericke ZABEL listed below.

Albert Heinrich ZIELSKE was born on the 11th March 1884 at Sagerke, Posen, Prussia. He emigrated out of Deutschland via the German Colonies on the the African continent, and embarked there in German South-West Africa on the vessel ANGORIRA to arrive in Australia at Hobart, Tasmania on the 25th April 1910. On disembarking Zielske went to Mundunna and took up as a farmer. After four years in Australia, at the ag eof 30 years he was Naturalised on the 12th August 1914 at Hobart, Tasmania. afterwards Zielske moved to Dunalley, Tas

Maximilian Bertholdt ZIETZOLDT was born on the 25th July 1861 at Wronke, Posen, Prussia. ZIETZOLDT emigrated out of Deustchland by way of the interim freed of Great Britain and there embarked at the Port of cardiff on the vessel SERIOL WYNN and arrived in Australia at the Port of Newcastle, NSW on the 21st March 1886

The ZUMPE BROTHERS originated in the Dresden Sachsen village of Mobschatz (Saxony, Germany), where one of their relatives famously invented the Upright Piano and manufactured the well-known Zumpe Piano. Their father though, anwered to the profession of Schuhmacher (Shoemaker), though two of his sons became well-known builders. He was Friedrich August ZUMPE (1821-1889) born Dresden, died in Richmond, Victoria, and their mother Emilie FLEMMING (1825-1895) born Dresden, who died in Hawthorn, Victoria. The family did not emigrate as a collective, but arrived in Australia in fits and starts in a piecemeal fashion, as they followed their militarily eligible young men far away from the incubating militarism that was infecting Europe.

The first to arrive was Friedrich Bruno ZUMPE, born 14 Februar 1858 at Mobschatz, Dresden, who emigrated at age 24 from Hamburg on the ship "CATANIA" arriving at the Port of Melbourne in January 1883. He travelled on that ship's voyage with his brother-in-law, Friedrich Hermann GABSCH, who married his elder sister, Bertha Emilie Stella Zumpe, who emigrated at a later date. F. B. Zumpe was married to Anna 'Marthe' Luise Johanne ANDERSON in 1886 at the German Lutheran Church, Eastern Hill, Melbourne, and they subsequently produced three Australian-born daughters and one son, the first one born in Richmond and the last in Hawthorn in 1901. F. B. Zumpe died on the 11th September 1907 in Fitzroy, Melbourne.

The second comer was Otto Ernst ZUMPE, born on the 9th September 1861 at Mobschatz, Dresden. He emigrated on the ship "S.S.PROCIDA to arrive in the Port of Melbourne on the 12th July 1884. He was a tischler (joiner /cabinet-maker, or carpenter by occupation. He married the Nunawading-born Emilie Johanne PAECH in 1891 at the Trinity German Lutheran Church, Eastern Hill, Melbourne, Victoria. The O. E. Zumpe family raised seven Australia-born children in Kew, Boroondara. After 20 year in Australia, at age 43, he swore the Oath for his Aliens Memorial for Naturalisation, while residing at No. 18 Scott Street, Kew, on 24th September 1904. Otto Zumpe died 9th May 1930 at Kew and is buried in the Boroondara Cemetery.

The third Zumpe emigration involved Richard Hermann ZUMPE and his mother Emilie Zumpe, who arrived together in the Port of Melbourne on the ship "S.S.HOHENSTAUFEN" in August 1887. He was born on the 31st July 1867 in Mobschatz, Dresden. Richard Zumpe was also Tischler (cabinet maker) by trade. The Zumpe's lived at first in Burnley area of Richmond, and then in Glenferrie and afterwards in the Kew area of Boroondara. He was married to fellow German emigre Australian, Leisel Elise Erna Caroline SCHNEFUHS, in Perth, Western Australia in 1903. They then returned from there to live in Kew, Victoria, where their native Australian son Friedrich Bruno Zumpe was born in 1904. Richard Zumpe took the Oath for his Aliens Memorial for Naturalisation while living at 24 Ruffs Avenue, Kew, on the very eve of the maelstrom of the war, on the fifth August 1914. He died in 1937 in Kew, Boroondara, Victoria.