Heinrich Henry NAVELL was born in the city of Hannover, in the Königreich Hannoveron the 23rd September 1855. Navell followed the cll of the sea, and emigrated out of Deutschland by way of the interim hub of seaports of refuge in England, from where he shipped his way to Wales. After times at sea, he embarked for the Port of Crdiff, Wales on the British Steamship "DULICH' and arrived at the Port of Williamstown, Port Phillip Bay, Victoria in February 1900. He was unmarried, working as a Labourer and Seaman, and residing at No.2 Morris Street, Williamstown, Victoria when he took the Oath in his Aliens Memorial for Naturalisation before Justice Read Murphy, Police Magistrate for the State of Victoria, on the 4th June 1914. 'Harry Navell died at age 68 in Williamstown in 1923.


Raymond Arnold NEUTS - aka RAND born 13th September 1890 Antwerp, Belguim. A lucky and a clever man to get out of Belguuin, NEUTS arrived from London on the ship 'S.S' BELTANA' on the 10th April 1915, disembarking at the Port of Melbourne. His occupation was that of Motor Mechanic working at Scheps Bros. Motor Engineers, ats St Kilda Junction. He resided at No. 142 High Street, St Kilda, Victoria when he was Naturalised on the 20th January 1918.


Friedrich Wilhelm NICKEL, son of Friedrich Wilhelm Nickel was born on the 15th March 1869 at Jodlauken, Insterburg, East Prussia. Nickel Emigrated out of Deutschland and embarked at the Port of Bremerhaven on the Nord Deutscher Lloyd Steamshop 'S.S.HABSBURG' to arrive in Australia at the Port of Melbourne, Victoria in early November 1886. On disembarking Nickel remained in Victoria for about ten years. Friedrich Gustav NICKEL was married to Bendigo-born Emily PRIOR in 1896 and went to Walhalla in the Gippsland Goldfields of Victoria. Th efirst two of their four Children were : Doris Nickel born 1896 at Walhalla (later Mrs BYRNE); Evelyn Nickel born 1898 Walhalla, (later Mrs MOORE). The Nickels then headed up the line through New south Wales for two years and then to Queensland for two years before transhipping to Western Australia for the duration. Their children born in WA were Friedrich Wilhelm Nickel, born 1903 Perth, WA; Emilie Nickel, born 1908 Greenbushes, Western Australia. Nickel went out to Mount Morgan for five years, back in Perth for a year, then three years at Greenbushes, a year in Meekatharra and then at Cue for a part of another year, the at Ravensthorpe, at Midland junction for five years, and to Kalgoorlie for three years, and then to Perth again, a total of 23 years in Western Australia. Age 55 a Miner, at No.54 Lake Street, Perth, Western australia 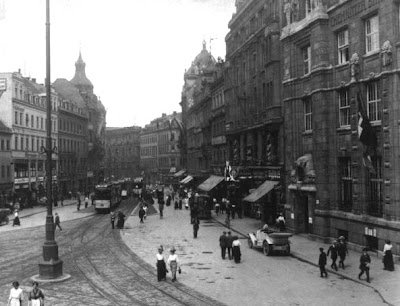 
Theodor Reinhold NIER, son of Oswald Theodor NIER, was born on the 9th June 1894 at Wittgensdorf, Chemnitz, Saxony. Neir emigrated to Australia on the steamship 'S.S.ROON' arriving at Port Melbourne on the 12th November 1913. Nier was caught out by the enmity in the Declaration of the War. He was Registered as an Enemy Alien during the War at Russell Street Police station, Melbourne. He lived for seven year sin the city of Melbourne from where he could make his weekly report to Police for the duration of the war, before moving out to Thornbury. When he applied to be Naturalised the report on him by Inspector Rowland S. Browne, said he was a person of good report, had a fiance in Germany, and states that "Nier visited Germany in 1921 on a Permit from the Home and Territories Department, in company with his present employer, for the purpose of examining and purchasing special machinery. He states he may return there for a similar purpose in a year or so from date. He is a successful and progresive young man of sound education." Brown concluded: 'No objection.' Nier finally submitted his Aliens Memorial for Naturalisation at Age 28 years, when working as a Mechanic and residing at 21 Flinders Street, Thornbury, on the 4th December 1922.


Franz Frohwald NOLL (aka Franz Frohwald WOLL - in correctly!) – b.2nd Feb 1866 at Schlema, Sachsen, (Saxony) Deutschland, the son of Friedrich August NOLL. Five foot two, blonde & blue-eyed, Franz Noll left Saxony for Australia, arriving in Sydney, New South Wales on the vessel “S.S. WESTPHALEN’ on the 5th August 1908. On disembarking he went up to Queensland, where he lived in Texas, Qlfd for one year, and then, back down south, staying for a year at Gunalha, NSW, and another year in the NSW Riverina, at Henry, before crossing into Victoria and settling in the Ovens valley at Harrietville. After twelve years in Australia, Franz Frohwald NOLL was a farmer at Harrietville, in north-east Victoria when he made the Oath of his Alien’s Memorial to be Naturalised on the 6th July 1921. His a character has given this attestation: “I have known the aplicatnt for 2 ½ years. He is a hard-working and law abiding man. He has left Germany for good and intends to reside in Australia for life and to take up land as soon as he may legally do so.”- Franzis Frohwald NOLL died in Bright, Victoria in 1949 at the age of 79 years.


Nicolaus Robert VON NOLTING cam of a noble family of Hannover. He was born on the 6th December 1890 at Verden in Hannover, Koenigreich Hannover. He arrived in Australia at the Port of Geelong, in the Corio Arm of Port Phillip Bay, on the ship 'MERIE-MACKFIELD" on 25th March 1908. When he submitted his Aliens Memorial for Naturalisation on the brink of War, it was already the 10th August 1914, he had been in Australia for six years, and he was then unmarried, working as a Mechanic, and living at 47 Autumn Street, Geelong, Victoria.