.
Open my first post "INTRODUCING THE ALIENS" -
for an Introduction and explanation of the purpose behind these Index lists. 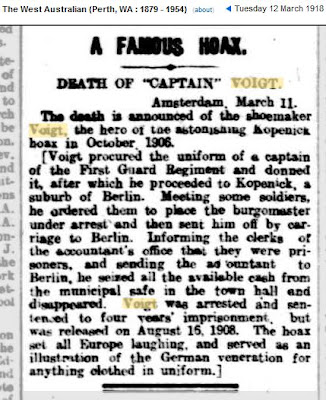 - Wilhelm VOIGT was never an Australian, though he could have been. We would have welcomed him. There are, however, many other Voigts here, however spelt: Vogt, Voght, Voigt, Voight - or Voit.

Wilhelm VEITH – born abt 1856 Rohrbach, an urban district of the City of Heidelber-am-Neckar, in the Grand Duchy of Baden, Deutschland- now the state of Baden-Wurttemberg – Saddler – Arrived att Port of Adelaide – SA in about 1877 – Naturalsed 28th September 1895 South Australia “ age 44 – 18 years in SA

Hermann Julius VENZ was born on the 11th July 1898 at Zechin, (Kreis Debier?) Neumark, Brandenburg, Deutschland and married in Germany. - To avoid the Military authorties Venz left his wife behind and emigrated out of Deutschland via the Port of Hamburgh on the vessel "RENDSBURG" to arrive in Australia at the Port of Adelaide on the 9th July 1911. On disembarking Venz resdided in Adelaide, for four months and then at Calotte 3 mnths , at Bowhill 12 months, and Port Augusta for a month, and at Port Pirie for 6 months, and then to the Murraylands, at Mannum for 4 mnths, and then he went up to Loxton where he took work as a Labourer on a road-grubbing contract. After 3 years in Australia Venz took the Oath of his Aliens Memorial and was Naturalised on the 22 September 1914 at Loxton, SA. On the 21st October 1914 a Police Report tells of him leaving Loxton on the 13th October 1914 with 7 other German Reservists, bound for Queensland. This report by Mounted Constable R. A. Lenthall, of Loxton, S.A., states : "Venz refused to give any information about himself and stated that when the war is ended he will leave Australia and go back to Germany. In my opinion, Venz desired to become naturalized so as when he returned to Germany he would be exempt from Military Training as he deserted from Germany when he was ordered by the Military Authorities into Barracks. Venz is a laborer and apart from his earnings has no other means of support." Nothing further of Venz's story has as yet been found.

Julius VETTER - was born on the 12th day of April 1886 at Golßen (Golssen), near Luckau, Kreis Dahme, in the Spreewald district of the Neumark of Brandenburg, in the Deutsch Reich of former Prußia. Vetter emigrated out of Deutschland and arrived in Australia on the ship "PORT CURTIS" on the 12th September 1911 at the Port of Adelaide. On disembarking Vetter went up to Tanunda for a year and then immigrated to Sydney, New South Wales for six months, but then returned to South Australia, working at the Smelter Town of Port Pirie. After two years in Australia, Julius Vetter was unmarried , then working as a Fitter at age 28, residing at Solomontown, near Port Pirie, when he took the Oath of his Alien's Memorial to be Naturalised before Mr Simon McBeath, Justice of the Peace of south Australia, on the 15th September 1913. 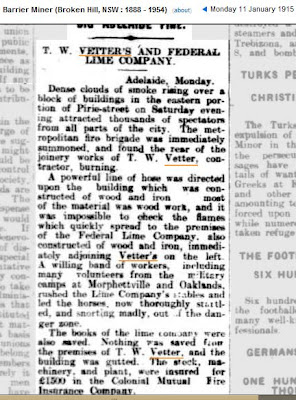 Theodor Wilhelm VETTER was a Cabinet Maker and Builder. He may have come to grief by this factory fire tragedy - unless it was an insurance fraud 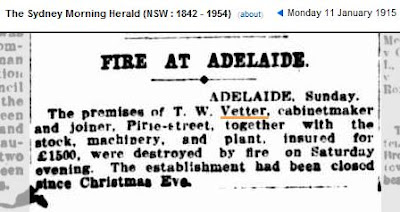 From 1909 to 1912 he was the President of the South Australian Germany Association and entertained the then Governor at their 25th Anniversary celebrations in 1911. Born Deutschland was married at age 49 to the 33 year-old Mary May BRICE at the Registry Office Adelaide, SA on the 17th June 1920 by which time Mary May had already borne him two children. It appears that his public image as a community builder was different to how the family remember him, which was as an unpleasant character. In fact he is thought of as a man whose son ran away at age 14 and changed his name so that he couldn't be found. It seems that he became a smalltime villain in Adelaide as a petty fraudster. 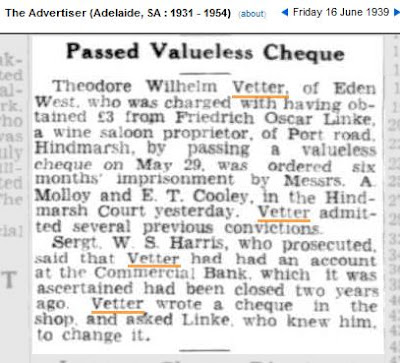 - And the following suggests that he may have been a threatening fellow. 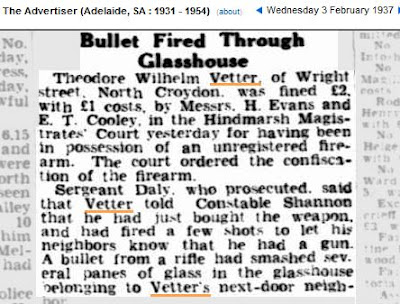 Apparantly he wasn't naturalised before WW1 so he got arrested in in 1941 as an illegal alien when he tried to apply for naturalization (he was unsuccessful). Theodore died in Adelaide in 1943. Family data courtesy of descendant, Kevin R. Brady.

Heinrich Henry VEITHEER born Altona on the estuary of the Elbe, below the Port of Hamburg, Deutschland. Seaman, Melbourne

Richard VON BECKERATH as born on the third of July 1851 At Krefeld, Rhineland, Prussia, Deutschland. He arrived from Germany on the ship "CITY OF BERLIN" (BERLINSTADT) in April 1875 at the Port of Adelaide, South Australia. He resided at the northern Barossa miningtown of Kapunda for a yeara, and then one year in Adelaide and the 37 years in various parts of Victoria. He married Millicent Rachel CROSSE in Victoria in 1890. Their children were: - 1. Otto Von Beckerath b.1901 Bright, Vic; 2. Richard Fabian Von Beckerath (1893-1894) Bright; 3. Lorna Von Beckerath b.1895 Bright, Victoria. After 39 years in Australia, when working as a clerk and living at No. 113 Queen street, Melbourne, Victoria, he took the Oath in his Aliens memorial for Naturalisation, tempting the brink of war's fate, as late as the 3rd of August 1914.

Georg Oswald Von HALLITCHACK was born on the 25th Ppril 1866 at Dresden, Königreich Sachsen, Deutschland, about five years before Saxony was integrated into the militerised Deutsch Reich. His agent wrote the place name on his papers as 'Draston'. Von Hallichack emigrated out of the Deutsch Reich on the ship "AMERICA" to arrive in Australia at Port Jackson, Sydney on the 14th December 1890, seeming determined to fossick for gold. Upon disembarking Von Hallitchack residied for two years in New South Wales at the Lucknow goldfield near Orange, and then immigated to the goldfields of Western Australia where he remained for eight years. He then returned east, taking up in Queensland for one year before settling in Bendigo, Victoria, and afterwards northeast of Melbourne at Eltham. After 23 years in Australia, at the age of 48 Von Hallitchack took the Oath and was Naturalised in his Aliens Memorial of 31 August 1914 at No.244 Mcintyre street, Bendigo. His wife Rachel was naturalised at 'Glen Park' Eltham, Victoria in 1921.

Carl Johann Ehregott 'Charles' VON STANKE arrived from Cape Town, South Africa in Australian at the Port of Semaphore, Adelaide, South Australia on the 18th February 1881 on the ship "S.S. CAROLA.' He was born on the 26th August 1861 at Köslin, Pommern (Pomerania), Prussia. He worked as a Bacon Curer, and seems to have moved around Southern Australian in that employ, for he married Elizabeth GOLLEY in 1889 in Victoria. The Von STANKEs had two children born in Ballarat in the next years: Aurelia Agnes Ariadne Von Stanke in 1890, and Carl Hercules Wilhelm Von Stanke in 1892. But he gives his usual place of residence was Adelaide before he moved with his family to Mount Gambier. At the age of 42 after being in Ausralia for 21 years, he submitted his Aliens Memorial and was Naturalised at Mount Gambier on 22nd February 1904.

Alfred VON STUBENAUCH was an American by birth, but had taken Deutsch Nationality and become a German Subject through his Naval Service, so he would have had a double dose of bitterness if he had been declared as an enemy alien. Stubenach was born on the 18th August 1867 in New York City, New Yourk state, USA. He arrived in Australia from England on the merchant ship 'S.S.CONQUEROR" in 1890 and disembarked at Port Pirie, South Australia. Afterwars he resided in South Australia for three years, then Western Australia for two years, Tasmania for seven years, then in Victoria. He was aged 46 years, and was a married man with four sons who had been in Australia for 22 years on the 4th March 1904 when he fulfilled his Aliens Memorial for Naturalisation, he was working as a gardener, residing at the town of Cunninghame, near Lakes Entrance, Gippsland, Victoria.